Ireland and the FinCEN files

The data showing FinCEN Files transactions graph shows more than $35 billion in transactions dated from 2000-2017 that were flagged by financial institutions as suspicious to United States authorities. Over 2 trillion dollars in transactions were documented in the Fincen files.

The International Consortium of investigative journalists have created a map, representing some of the transactions documented in the Fincen files to illustrate how potentially dirty money flows from country to country around the world, via U.S.-based banks. The data only represents cases which included specific details about both the originator and beneficiary banks, amounting to more than $35 billion in transactions dated from 2000-2017.

The graph details 44 suspicious transactions that flowed to and from Ireland extracted from the FinCEN Files. A total of $64 million was received and $175 million was sent from Ireland. 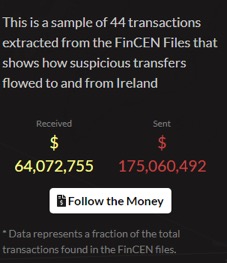 It then breaks down these transactions, showing the amount of money that was sent and received by banks in Ireland including AIB, Ulster Bank and Bank of Ireland. 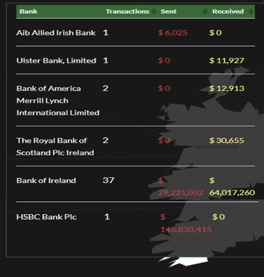 These transactions were processed via 4 U.S.-based banks, which filed suspicious activity reports with FinCEN. AMLIntelligence takes a deeper look into the suspicious transactions linked to each bank with Deutsche Bank’s global SARs accounting for a total of $1.3 Trillion  in  value, and making up 982 of the 2100 SARs released by the papers. BNY Mellon has been accused of transferring funds for Ukranian oligarch Dmytro Firtash, wanted on criminal charges in the US. BNY Mellon in conjunction with the other banks named by ICIJ handed transactions for companies in Firtash’s control. 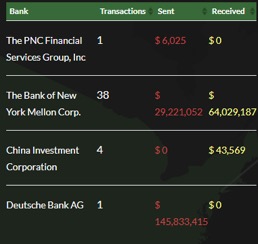 ICIJ then breaks down each transaction showing the money moved between Ireland , the U.S. and 6 other countries.The FinCEN Files reveals the role of global banks in industrial-scale money laundering and show the magnitude and reality of money laundering and terrorist financing and the relation to organized crime, which politicians have not experienced prior to the same extent.
It should have an impact on the next steps by the EU.

To view the map in full go to https://www.icij.org/investigations/fincen-files/download-fincen-files-transaction-data/

For more on the Fincen files go to AMLintelligence.com